Vitamin B12 Deficiency: 10 Symptoms to Be Aware Of 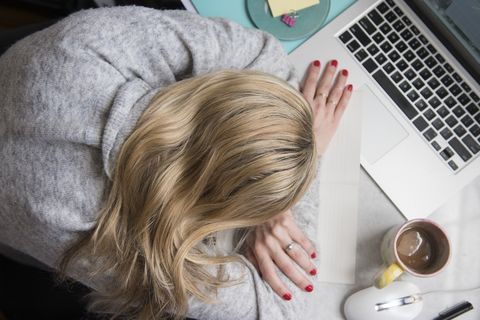 Vitamin B12. You've probably heard of it, but do you really know what it is - or what it does? Well it turns out vitamin B12 is an essential vitamin helping us to function normally every single day. However, vitamin B12 deficiency is becoming more and more common, and can lead to everything from fatigue to depression.

What is Vitamin B12?

Vitamin B12 is an essential vitamin naturally found in animal foods - including meat, fish, poultry, eggs and dairy. It plays an essential role in the production of red blood cells, as well as keeping our central nervous system functioning properly.

Let's go back to A-level Biology for a sec. As humans, we get our main source of Vitamin B12 through the animal produce we eat. It’s released from food by our stomach acid, before combining with a protein called intrinsic factor and is then absorbed in the small intestine. From there, it gets straight to work forming healthy blood cells, generating DNA, extracting energy from food and ensuring the proper working of the brain and nervous system – aka the fundamentals.

[We earn a commission for products purchased through some links in this article.]

What are the symptoms of low vitamin B12?

The most common Vitamin B12 deficiency symptoms read like a teenage diary entry – low mood, irritability, clumsiness – but failure to address a deficiency mean the consequences could be serious.

‘Unchecked, a vitamin B12 deficiency can lead to shrinkage of the brain, irreversible memory loss and poor functioning of blood cells, resulting in anaemia,’ explains David Smith, professor emeritus of pharmacology at Oxford University.

Should you need a reminder, anaemia is a reduction in the normal number of red blood cells. Professor Smith explains that a B12 deficiency can lead to a specific kind, called megaloblastic anaemia, where by your body doesn’t have enough cells to carry oxygen around the body – hence the breathlessness.

For most people with a deficiency, good nutrition can get you back on track.

While you probably know to reach for the OJ when you need some vitamin C, awareness of B12 – and where to get it – is low.

What to eat to avoid Vitamin B12 deficiency

‘If you eat meat, fish or dairy foods, you should be able to get all the B12 you need from your diet,’ says Harley Street nutritionist Rhiannon Lambert.‘It shouldn’t take too many diet tweaks to hit that daily target – it’s just a case of knowing what foods to find it in.’

Eat scrambled eggs made with a splash of milk for breakfast, a niçoise salad for lunch or a salmon fillet for dinner and you’ll get an instant boost of vitamin B12.

How to hit your B12 quota if you're vegan:

If you’re vegan – and you may well be, given the 700% jump in those shunning animal products since 2016 – you’re at higher risk.

While it’s harder to come by, it is possible to get enough B12 from a vegan diet.

‘Vegans can find B12 in a lot of plant-based foods, such as soya and nut milks, which are often fortified with B12 to help them get their daily quota,’ says Lambert.

The key is getting the quantities right. ‘Fortified nut milks have around 0.38mcg of B12 per 100ml, while fortified soya milk has around 1.25mcg per 100ml.

Engevita Yeast Flakes are also great sprinkled into your smoothie, on your pasta or salad for an instant hit of Vitamin B12.

Some breakfast cereals are also fortified with B12, though it might require some label-combing to be sure, and in news that will cause you to salivate or squirm, B12 is abundant in Marmite. So get spreading the stuff on toast, pronto.

Signs that you're deficient in B12:

A lack of B12 can mess with your mental health and can eventually lead to depression or anxiety. Low B12 levels may affect the production of serotonin and dopamine, which regulate mood. Look out for any changes in behaviour, too.

Lacking the vitamin can also sap strength and energy, because it affects the red blood cells that carry oxygen to your vital organs. When you’re low on O2, you feel wiped out all the time, no matter how many zeds you log.

Your balance is shot

Without the protection of B12, the nerves in your spinal cord can wither, leaving you dizzy and wobbly. Unless you’re wearing sky scraper stilettos, stumbling regularly isn’t normal. Report ongoing instances of feeling off-kilter as soon as you notice them.

That potential nerve damage? It can affect your brain, too, leaving you feeling confused or forgetful. We all have our goldfish moments, but if you’re finding that word or name is just on the tip of your tongue all too often (and never off it), get yourself checked.

You've got a prickly sensation

Pins and needles sensation in your hands and feet?That could be low B12stocks affecting nerve cells.Ignore it and the tingling feeling can become permanent, warns JoshuaMiller, professor of nutritional sciences at Rutgers University.

Your tongue is smooth, thick and shiny

A B12 deficiency could cause you to lose papillae– tiny, taste bud-containing bumps. As a result, your tongue may feel sore and your sense of taste may wilt, making even that spicy curry seem bland.

Who does B12 deficiency impact?

Statistics suggest that B12 deficiency mainly affects older people, with one in 10 aged over 75 affected, but a recent study by the World Health Organisation suggested that the real numbers could be higher than previously thought among younger people, too.

What treatments are there for Vitamin B12 deficiency?

Whilst the general consensus is to make sure you're consuming enough vitamin B12 through food, a study published in the BMJ in 2016 found that 12% of women aged 19 to 39 were B12-deficient, despite consuming the 1.5mcg RDA.

‘The traditional view that doctors are taught in the UK – that a good, well-balanced diet is all you need – is simply not true,’ says Professor Smith.

‘Some people require more B12 than others, particularly pregnant women, among whom there is a high prevalence of B12 insufficiency – a phenomenon we don’t know the reason for.’

Causes of Vitamin B12 deficiency

One possible explanation is malabsorption – when you can’t physically extract the B12 from food. ‘The most common cause is insufficient acid production in the stomach, so the B12 bound to food proteins isn’t released,’ says Professor Smith.

Studies have shown that people who take heart burn medications called PPIs (that’s proton pump inhibitors, like Rennie) for a prolonged period of time end up reducing their stomach acid. No acid? No B12.

And conditions like Crohn’s and coeliac disease can have an impact, too. ‘Malabsorption diseases that cause gut injury will also create problems with absorption of B12, so people with these conditions need to be on the alert for possible deficiencies,’ says dietitian Nicole Rothband. It could also be genetic.

The link between Vitamin B12 deficiency and anaemia

While B12 deficiency can lead to anaemia, confusingly, a different kind of anaemia could explain why you’re not getting enough.

‘Pernicious anaemia is a genetic disease known to be an established cause of vitamin deficiency, including B12,’ explains Professor Smith. ‘It occurs when the body produces antibodies that attack intrinsic factor proteins in your stomach, which are responsible for allowing the gut to absorb B12.’

Here, one WH writer shares her story of realising that vitamin B12 deficiency was at the root of her fatigue. Read on to learn more – and commit to memory the B12 deficiency signs.

'Can we just... slow down?’ I pant to my husband. He looks confused. We’re not on a 10km run ora Sunday bike ride, nor are we having the kind of sex that requires an interval.

It wasn’t just the breathlessness. I felt so tired that my weekly hour of horse riding would require a six-hour nap later that day, and my mood plummeted so drastically that ‘what’s wrong now?!’ had become my long-suffering husband’s catchphrase.

By the time I found myself bent double on my way to do the weekly food shop, I knew
I couldn’t keep blaming my hormones, work or poor sleeping patterns. I knew my body, and I knew something was wrong with it. Several exploratory blood tests later, I had my answer: I was deficient in vitamin B12.

The NHS recommends 1.5mcg a day of vitamin B12 a day. Without this, your body will notice, and fatigue is the tip of the iceberg.

Whilst doctors suggest getting the recommended amount of vitamin B12 through a varied diet should be enough, I was left confused. I’m not vegan. Chocolate and cheese-induced dairy comas are my downfall and Sunday roasts are non-negotiable. I should be as high as a kite on the stuff–but when I turn detective in the hunt for my missing B12, I find out you can be deficient despite getting enough from your diet.

While it’s useful to arm yourself with knowledge, you can’t diagnose yourself, and Professor Smith tells me I was right to make an appointment with my GP when I did – a trip that confirmed that my B12 levels were 120 pmol/L (picomoles per litre).

‘B12 levels are usually seen as normal if they are above 148 pmol/L,’he explains. ‘But you can experience symptoms of deficiency even if your levels are around 400 pmol/L.’

‘Unlike vitamin A or folic acid, B12 is one of the few vitamins for which no upper limit has been decided upon by the authorities, and a high level has not been shown to cause any harm,’ says Professor Smith.

How I got rid of my Vitamin B12 deficiency

If your B12 levels are low despite getting enough from your diet, then it’s more likely to be an absorption problem, meaning oral supplements won’t help, either. In this case, B12 injections will be prescribed – especially if symptoms are severe and you need to pump up your levels pronto.

Such was the case for me. I was prescribed a course of six intramuscular B12 injections over two weeks – with a view to topping up every three months for life. The results, however, are worth it – within a week, my mood and energy levels were back to normal.

If you suspect you might have a vitamin B12 deficiency - book an appointment to discuss your symptoms with your GP.

This content is created and maintained by a third party, and imported onto this page to help users provide their email addresses. You may be able to find more information about this and similar content at piano.io
Advertisement - Continue Reading Below
More From Conditions
Why Do I Keep Getting Trapped Wind?
Some under 18s Are Set to Be Offered the Covid Jab
Advertisement - Continue Reading Below
6 Weird Signs Youâ€™re Not Getting Enough Iron
16 Benefits of Super-succulent Aloe Vera
Your 'Long Covid' Faqs, Answered
From Day 1 to 10, These Are the Stages of a Cold
24 Supplements Actually Worth Taking
'My Epilepsy Was Misdiagnosed for Years'
Love Island's Demi Jones has thyroid cancer
Energy Is Currency: ME/CFS Robs You Of It
xxfseo.com